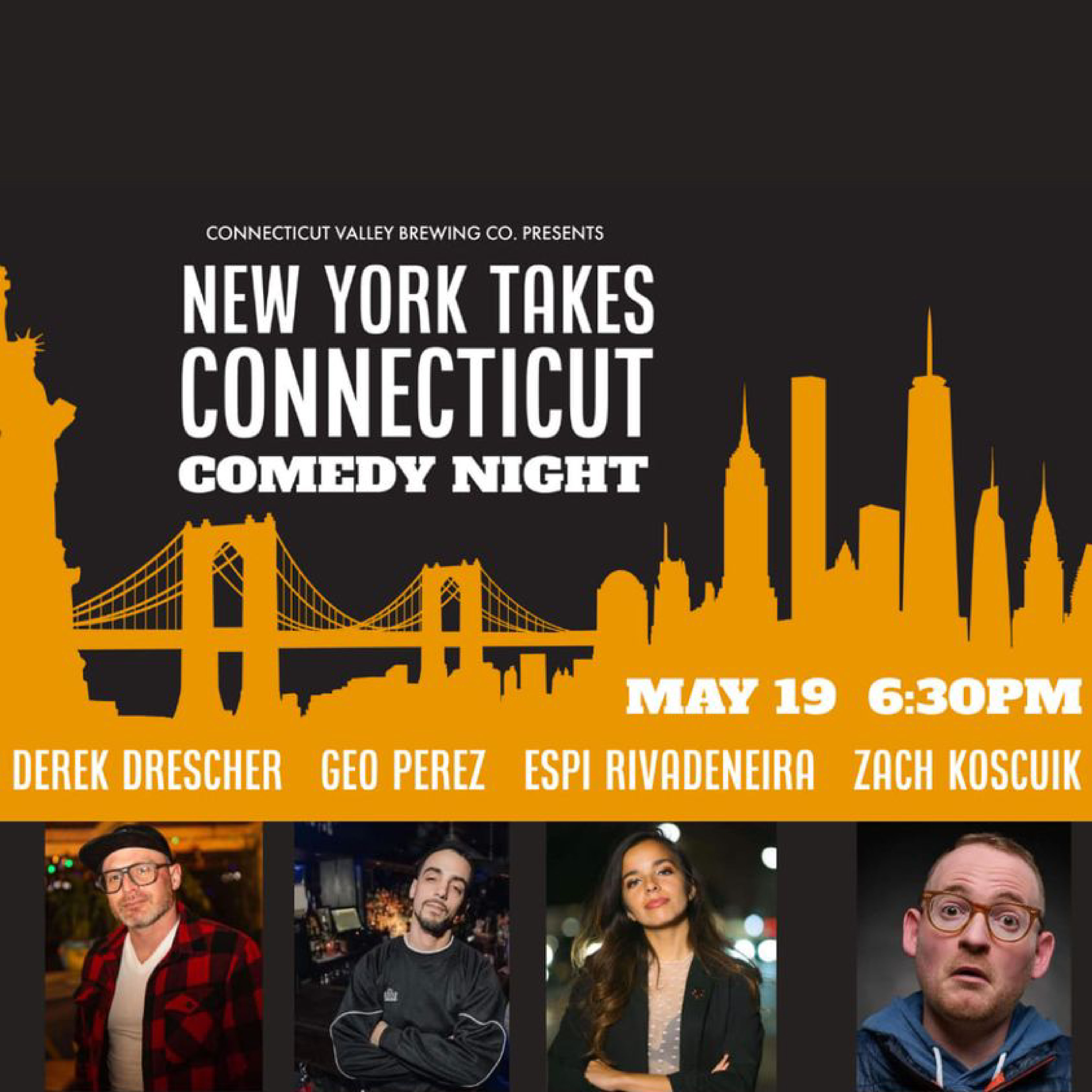 Join us on May 19 for a lineup of New York comedians. Hosted by Ayesheh Mae, you’ll be laughing with this incredible lineup of comedians all night long. It’s New York takes Connecticut night, baby!

INCLUDED IN YOUR TICKET
One draft beer included in your ticket compliments of Connecticut Valley Brewing Company. Must be 21 years or older to redeem ticket.

THE LINEUP
Derek Drescher and Geo Perez are both reformed ex cons who have performed all over the city and run the 23 and 1 comedy show in New York at the Stand which has been selling out every single month. They’ve both performed with names like Dan Soder from Billions, Mark Normand, Rose Bud Baker, Aaron Berg, Big Jay Oakerson and more.
Espi Rivadeneira is a stand up comedian from upstate New York. She has performed all over Texas, Los Angeles, New Jersey, Maine, and is currently based in New York City. Espi loves to perform daily and has a quirky, dark sense of humor. She has opened for Jake Johannsen and has featured for Jose Sarduy. She has performed at The Stand, regularly at The Grisly Pear and hosts a weekly show, “Monday Night Comedy” every Monday 10pm at The Comedy Shop.
Zach Koscuik is a stand-up comedian and podcaster in New York City. Zach has an approachable style that mixes with his dark sensibilities as he weaves his way through interesting anecdotes that have followed him throughout life. Koscuik is the co-host of The Wine Boyz Podcast where is working on becoming a wine snob and sommeliers worst nightmare. He has performed at various clubs in the city including the comedy shop and Broadway Comedy Club.

ABOUT CONNECTICUT VALLEY
In South Windsor, the heart of the river valley, Connecticut Valley Brewing Company brews a host of different brews and styles. From their flagship NEIPA Trailblazer to classic lagers like Ace of Aces to hard seltzers, ciders, and unique Spiked Smoothies: there’s more than just a little something for everyone. Named 2021’s Hartford Courant Readers’ Poll Craft Brewery of the Year, Connecticut Valley Brewing Company has carved out a new niche in the brewing world that promises fun, experimental, and exceptional brews for everyone.
Purchase tickets now and receive a 16oz draft beer with your ticket: https://www.eventbrite.com/e/329980078297